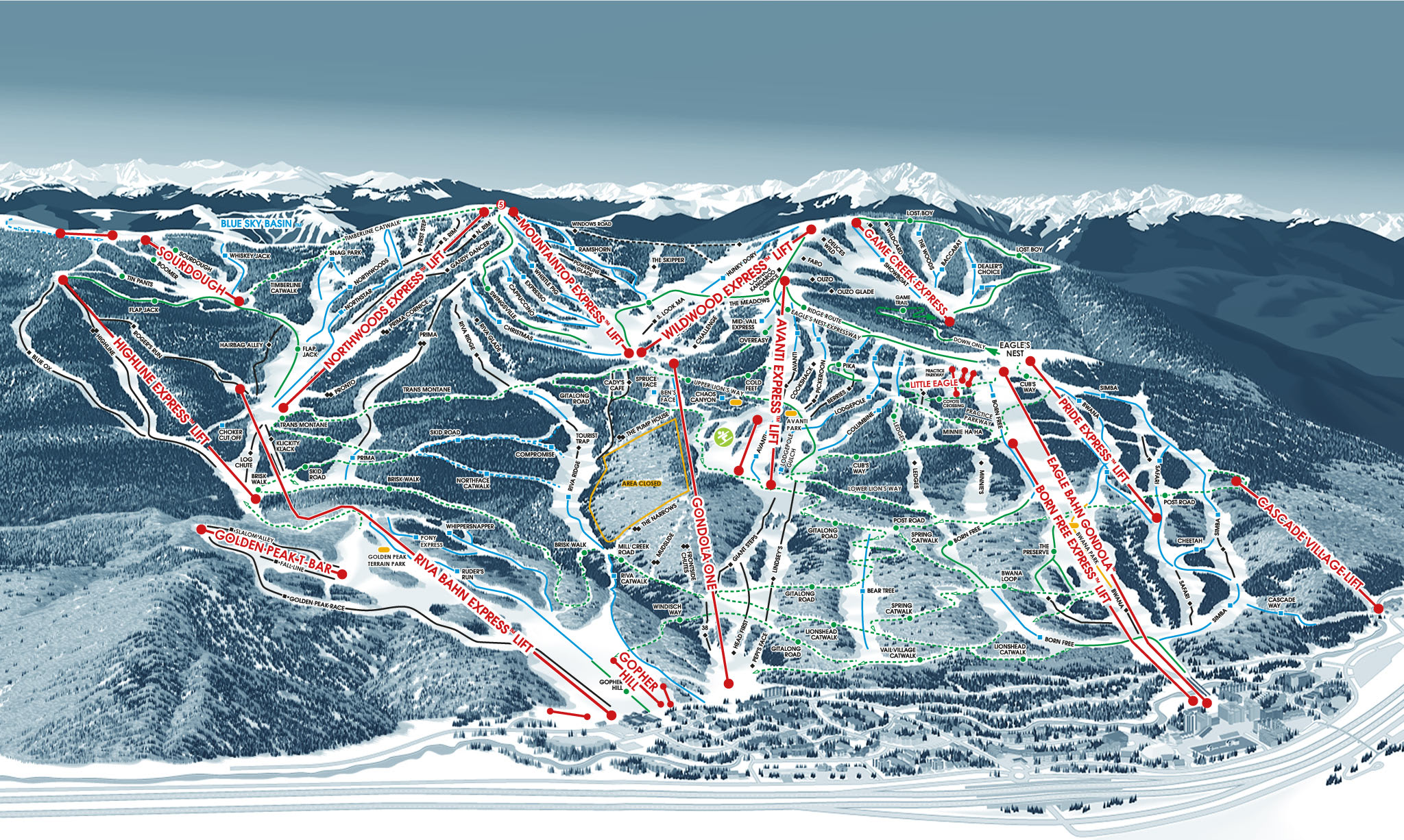 Vail has over 190 ski trails spanning over 5,000 acres of varying terrain.  It’s one of the largest ski areas in North America and is almost 60 years old and averages just over 1.2 million visits each year.  However, have you ever stopped to wonder about how your favorite trail at Vail got its name? Well, look no more, here is the shortlist on how a few iconic runs got their name.  It’s great history and also great trivia to challenge your lift or gondola mates next time you are on the hill.

HAIRBAG ALLEY: Named for the “hairbag” long-haired skiers that frequented this gulch out of Northwoods in the 70’s.

COOKSHACK: The ruins of an old logging camp cook shack were found here when the mountain was surveyed for skiing. This run is used for mogul training and can be seen on your right as you are riding up Avanti #2.

COW’S FACE: A tree-cutter once described a Loveland Basin run as “steeper than a cow’s face, and her a-grazin’”. Vail founder Pete Seibert, then manager at Loveland, remembered the description and thought it fit this trail perfectly.

CHINA BOWL: Years before it was officially open to skiers, China Bowl had been named for its headwall, visible now from the top of Orient Express, Chair 21.  This long limestone formation reminded early Vail skiers of the Great Wall of China. In 1988, Vail opened Tea Cup, China, Siberia, and the Mongolia Bowls, all served by the Orient Express Lift #21. The expansion more than doubled the size of Vail’s ski terrain. In 1985, ski patrolman Jim Himmes and Sandy Hinmon began naming the ridges, chutes, and gullies. Other patrollers added their ideas and trail names fell into place incorporating the Chinese theme, with Siberia and Mongolia Bowls relating to the remote stretches of the Asian Continent.

GENGHIS KHAN: One of the steeper and meaner areas, named for the notorious 13th century Mongol conqueror.

WIDGE’S RIDGE: Named for Alice “Widge” Ferguson, an early Back Bowls fan from Denver, who always seemed to bring snow with her when she came to Vail.

WHISTLE PIG: Whistle Pig is a nickname for the yellow-bellied marmot, a western relative of the woodchuck. These alpine rock-dwellers whistle sharp warnings when approached.

CADY’S CAFE: An early member of the Mountain Operations team with the last name Cady was given the project of overseeing an early waste facility below Mid-Vail – this building became known affectionately as “Cady’s Cafe”. When the building was converted to storage and the waste removal process at Vail was upgraded, the area around the building was opened to skiers and the name stuck.

O.S.: This trail skirts the far southwest boundary of the ski area and then cuts back into Sun Down Catwalk. In Vail’s early days, if a skier missed the cutback and skied on down through the trees, he found himself below the chair and had to walk back up the hill. O.S. meant “Oh, s**t, I missed the turn!” A good reminder always to obey ropes and closure signs!

BLUE OX: Located on the Front Side in the Northeast Bowl, this bowl’s trail names reference the area logging operations that went on in the late 1800s. The name “Blue Ox” refers to the American folk legend of Paul Bunyan. He was said to be a giant lumberjack of great strength and ability whose favorite companion was the equally massive and strong Blue Ox named Babe.

NORTHWOODS: Cut in 1967, Northwoods was the first trail in the Northeast Bowl and existed long before Highline Express Lift #10 and Northwoods Express Lift #11 were built. It is named for the beautiful, tall trees through which it runs.

RICKY’S RIDGE: Named for Ricky Andenmatten, a Zermatt, Switzerland native who served as one of Vail’s first ski instructors.

RIVA RIDGE: As you may know, Vail owes much of its history to the 10th Mountain Division, an elite group of mountain warfare light infantry that trained at nearby Camp Hale and served in World War II. The trail name comes from the infantry’s best-known combat achievement on Riva Ridge in the mountains of Northern Italy in February of 1945. You can see a great documentary and display about the 10th Mountain Division story at the Colorado Ski and Snowboard Museum. One of Vail’s original trails, it is still the longest single run on Vail Mountain at 4 miles. This steep run varies between blue and black pitches and provides gorgeous views. Keep an eye out for the steepest section, lovingly referred to as “Tourist Trap”.

LOST BOY: Lost Boy is named for Martin Koether. When he was 14 he skied into Game Creek Bowl by mistake before it was developed and spent the night in a snow cave under a tree while rescuers searched the mountain for him. He made his way safely out of the bowl the following day and proudly proclaimed to patrollers that he was the “Lost Boy” they were looking for.

IN THE WUIDES: Named in honor of Paul Testwuide, known by his friends as Wuide and a part of the Vail family since the beginning. He was a major force behind the development of Blue Sky Basin.

POWERLINE: Initially cut to make room for – you guessed it – a power line, it was an unofficial run for many years that was beloved by experts for its narrow width.

WHIPPERSNAPPER: This area was cut as a kid’s adventure zone in 1987 and refers to crotchety adults’ term for rambunctious young ruffians, “Those darn whippersnappers!”

LOOK MA – This steep run situated right behind The 10th is the former site of the World Cup Mogul Tour and a great chance to show off your bump skills to all of Mid-Vail.  Given its unique location and pitch, it seems to evoke a sense of showmanship and bravado that only moms could appreciate.

FOREVER – Named by a Vail original, Pepi, of Pepi’s Face and the restaurant in Vail Village, Forever was named when Pepi first skied the run in 1961.  When he reached the top of Vail mountain, he was so excited to ski the wide-open field of powder that he saw, he skied down to the bottom without thinking of the repercussions.  Since Vail didn’t open in 1962, Pepi had to hike out from the bottom of the run without the aid of a chairlift. When he finally got back to the top, he said “By God, that’s a super slope! But it takes forever to climb out!

OUZO – Ouzo, a fiery Greek liqueur, relates to a deal cut between Eagle Valley sheep rancher Chris Jouflas, who owned the bowl, and Vail Associates, which needed his land. Jouflas brought a bottle of Ouzo to the bargaining table and negotiations proceeded happily toward a contract.

…and there you have it!  Enjoy these fun tidbits of information on how some of Vail’s ski trails got their names.  Feel free to share them with your friends or guests as you ride up the chairlift or gondola of your choice on your next skiing adventure in Vail.

In the meantime, happy skiing and riding!